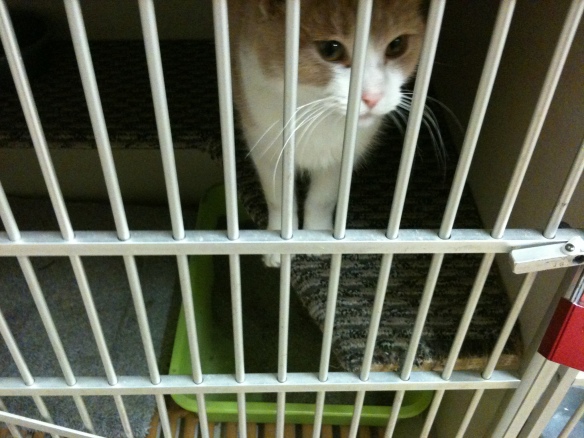 This is not Cheddar. Angry Eyebrows took him away before we could snap a pic. This is a different ginger cat I spotted at another adoption fair. Super cute. I visited him twice.

Ask Matt what my favorite part of going to the pet store is and he’ll easily answer you.

“The cats. She loves to see the cats.”

Every time we go to PetCo or Petsmart, I immediately make a beeline for the spot where rescue organizations set up shop with their furry felines. It’s been months since we lost Pink, and I can’t deny that I miss the pussycat purr in our home.

Last weekend we needed dog treats and we decided to go to PetCo since it carries Charlie’s favorite in bulk. We also put the treats on top of Lexie’s kibble to encourage her to eat.

We walked in the store, and right into heaven … or should I say a cat adoption fair.

The second cage had an orange stripey cat. he came right to the front and pressed his body against the bars. I’m a sucker for a ginger.

“He’s a cutie!” I whispered to Matt. He nodded.

As I pushed my finger through the cage bars to touch the kitty’s nose, a woman wormed her way between Matt and me.

“Would you like to hold him?” she asked, already opening the cage and reaching in to grab the cat.

“Umm, sure,” I said. I was happy to hold a cat again, but not exactly sure I was ready to make a commitment right then and there.

The woman put the cat in my arms. As I looked up to ask the cat’s name, I was startled. By the woman’s angry eyebrows. They were clearly painted on … in an angry fashion.

“His name is Cheddar,” she said. We asked if he got along with dogs, and she said she had one dog at home but she wasn’t really sure how they got along. The woman told us she has numerous cats, and they all got along.

We told Angry Eyebrows that we had two dogs, and she bristled. We said they were relatively small, and lived with a cat before. She looked away, disinterested.

Matt ran his fingers over Cheddar’s paws, and asked if he was declawed. She said no, and we both expressed relief. Me because I don’t believe in declawing a cat, and Matt began to mention the … (record player screeches)

“Oh, do you want an outdoor cat? We don’t allow outdoor cats. We want our cats to stay indoors. Always. It’s too dangerous for cats to be outside. ….” (fade to black)

I explained that Pink was not an outside cat. She loved sleeping on her cat perch or the couch. But she had wandered out the dog door a few times, only to wander about five or six feet before running back inside. I explained all of this, but Angry Eyebrows wasn’t having any of it.

She grabbed Cheddar, and pulled him tightly to her chest. And with that, our cat adoption interview was over.

This was for a cat we didn’t really want to adopt in the first place, but suddenly I was pissed that I was summarily dismissed.

I wondered if we would ever be allowed to adopt a cat with our dog door. I imagined us boarding over the hole in the side door, and growing frustrated as Charlie took to pooping in the library again. With gusto.

Could it be Angry Eyebrows was right?

Regardless, I came to accept it just wasn’t the right cat.

We’ll keep looking. I know the fuzzball is out there.