Charlie wears his Thundershirt for the last time. The chest strap proved to be a better chew toy than his many bones.

OK, so the Thundershirt lasted exactly one week.

Charlie managed the chew through the chest trap, turning it into a useless doggie tubetop. Desperation kicked in, and I thought I could salvage the destruction. I pullled the chest strap tighter, just barely fastening the gnawed remnants of velcro together. Part swaddling/part straightjacket, the shirt is designed to alleviate doggie stress. Sadly, it was no defense against Charlie’s anxiety. I’m sure it didn’t take much to pop the chest strap open once we left for Eastern Market.

The good news is that Charlie was so busy chewing his Thundershirt that it didn’t even occur to him to chew on the window sill.

If you would like to receive email notifications when Finding Furever publishes a new blog entry, please go to the home page and click on “Email subscriptions” in the right nav. Thanks for joining our journey!

I would be lying if I said I didn’t worry.

You see, today was not an ordinary day. It was the first time we left Charlie alone all day long. 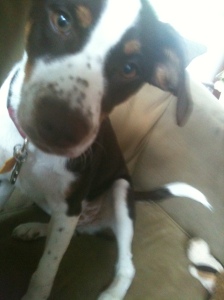 I imagined a hole in our couch. Teeth marks on my Mission-style furniture. A fresh pile of poop on my bed.

Instead, I was greeted by a wiggly Charlie, who begged/dared me to give him an “I’m home!” rub. He triumphantly waved a chewy bone in his mouth.

Not a thing was disturbed. In fact, neither Lexie nor Charlie even touched a morsel of their kibble. Hmm. Impressive.

We moved to the yard, so I could throw the fluffy squeaky bone to Charlie. Somehow, this is his favorite toy for fetch. It’s absolutely awkward: a stuffed bone that weighs next-to-nothing and is almost impossible to throw more than 10 feet. Still, the sight of it makes him jump up and down like … a puppy! 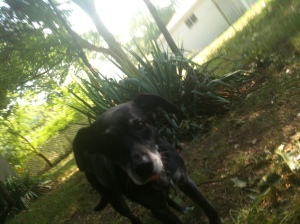 Lex saunters at her own pace in the yard. Her wrestling days are over.

We tried tennis balls, but Charlie soon lost interest. He would zoom after them, then take a sharp right turn and attempt to tackle Lexie. Now that she’s a delicate 14 years old, we were not going to allow any of those shenanigans. We quickly declared Lexie a no-fly zone, and ….

Hey! What are these wood chips on the couch? And what happened to the front picture window? Are those teeth marks in the wood? What the ….???

So yes, just as I was about to present myself with the Most Awesome Puppy Owner award for Least Destruction in a Single Workday, the ceremony was quickly aborted. I couldn’t deny it, or even hide it. Charlie had chewed the front window. 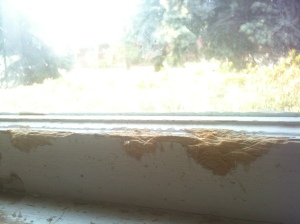 The good news is that this window and sill were significantly damaged many years ago by another unruly dog. And I plan on replacing the entire unit with something without teeth marks (and more energy efficient) in the next year or so.

The problem is that for the next week, with Matt out of town, I have no way of correcting his behavior. I could hope really hard that he just won’t find the front window tasty anymore. Scientifically, I think that’s my best bet. In fact, right now I’m closing my eyes and thinking NO EATING THE FRONT WINDOW! and amazingly, Charlie has not left his bed.