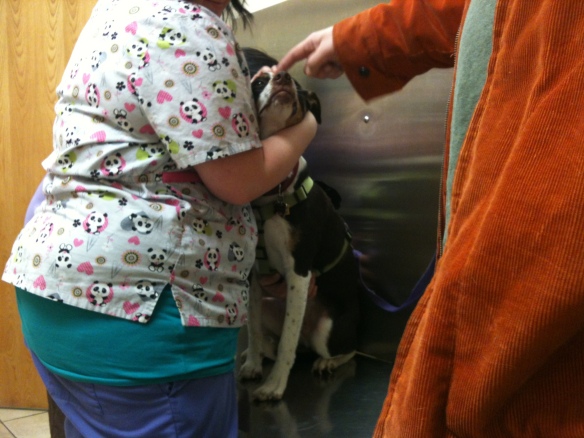 Matt distracts Charlie as a tech readies to give him a shot.

We recently brought Lex and Charlie to the vet to get them up-to-date on their shots.

For Lex, this was old hat. She calmly waited for her shot, and didn’t even try to hop off the exam table.

Charlie, however, was another story. He wiggled and whined and twisted and turned. The vet tech told us not to fret, that she had it under control. And then Charlie would break free. Matt stepped in to help calm Charlie, gently rubbing his nose and telling him he was such a gooooood boy.

I took this opportunity to speak with the vet about Charlie’s anxiety. I told her about his destruction, the couch cushions, the window sills, the Thundershirt. His insistence upon pooping in the house, even though we have a dog door.

Other alternatives tossed around include consulting a behaviorist, purchasing a special collar and anxiety medication.

We’ve opted to introduce neighborhood walks, in addition to our running games in the back yard. Also, we have increased the number of times and length we leave him alone. For extended periods of time (for example eight hours or more) we have opted to board the dogs at Camp Bow Wow, which they love.

I have been experiencing medical issues that have prevented me from being as actively involved with Charlie as I would like. I’m hoping to get this resolved by summertime.

I think Charlie would like a new walking partner.

It’s funny the silly routines we fall into when we think no one is watching. It’s a different story when we have to explain ourselves. That’s where Matt found himself when we was dropping off Lexie and Charlie for a … Continue reading → 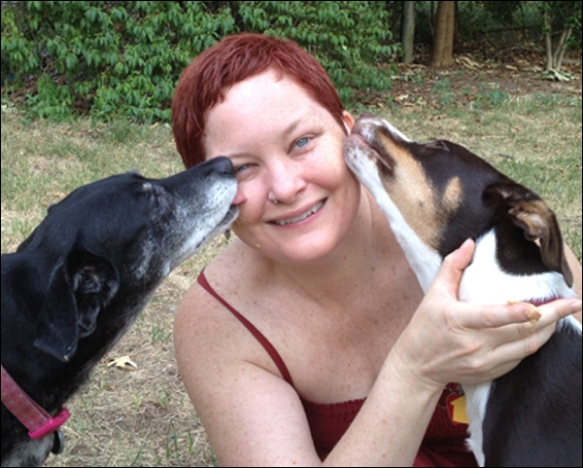 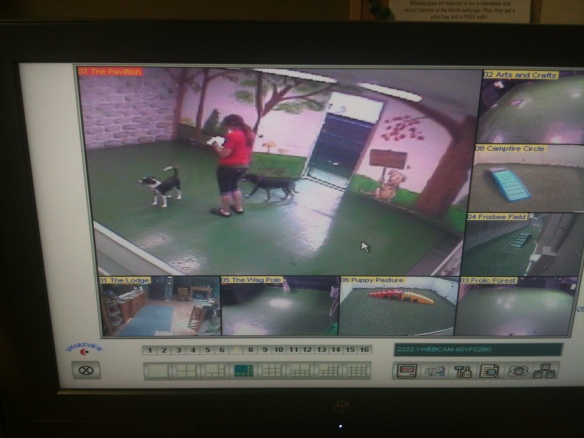 Most pet owners know planning for a vacation can get complicated.

Now add a puppy and an ailing dog to the mix. To put it simply, I’m not anxious to hand them over to anyone.

Back when Lexie was younger, going out of town was easy. Sometimes even last-minute. I’d call a friend to check in on her and feed her once a day. With the dog door, she needed very little supervision. As she aged, and her anxiety rose, we started to use doggie day care or would board her for short trips.

Now Matt and I are preparing our first major trip together. On a plane, even! Between Lexie’s limited mobility and assorted medical issues, and the fact that Charlie is 100 percent puppy, we realized we would need to board them. On occasion I had used Camp Bow Wow in Ann Arbor for doggie daycare with Lexie. So we looked into it, and it ends up there’s a Camp Bow Wow closer to our house, as well.

Since Charlie had never been to Camp Bow Wow before, we made an appointment for an intake interview and tour. We were shown the cabin that Lexie and Charlie will share, their indoor/outdoor play area (monitored by webcams) and left the pups in a large playroom for their interview.

We were allowed to watch from the lobby on a large monitor.

Both dogs eagerly interacted with the woman running the interview, then different kinds of dogs with varying energy levels were brought in. Lexie mostly ignored them, and Charlie wanted to play. Afterward, I was told to leave them for a couple hours so the staff could figure out which play group to assign them to.

After grabbing lunch, I went back and spotted Lexie trotting at a moderate speed across the screen. Was that my geriatric dog? She looked great. And Charlie was running back and forth, his tail up in the air, the tip curled. Was he smiling? 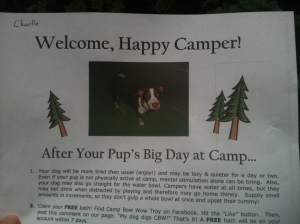 I made my appointment for our upcoming trip, and received a welcome report on Charlie. Both dogs were assigned to play in the small dog group. That sounds perfect.

The guy at the front desk assured me they both did great, and will do fine when I bring them back.

I know they can’t wait. 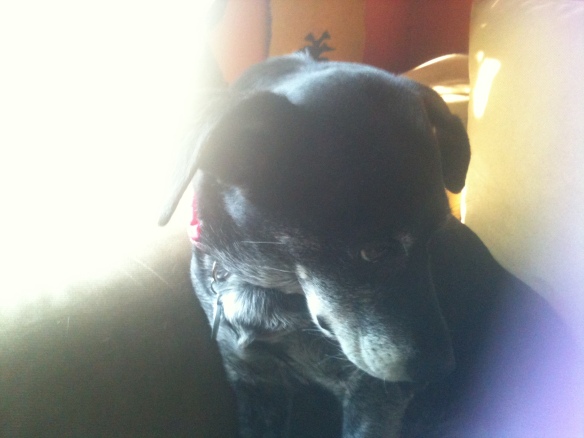 Lexie in her favorite spot, soaking up the late afternoon sun.

Ordinarily this would be no big deal, but when the actual vet makes the call it’s obvious something heavy hangs in the air.

The results indicated Lexie’s kidney values are elevated, meaning she is in the early stages of kidney failure. I know this is common in elderly dogs like Lexie. But I also know this officially marks the beginning of the end.

The vet told me I would have to stop giving Lex the Meticam pain killer/anti-inflammatory for her arthritis because it will accelerate the kidney disease. She said I can give it to her for two more days, then only when she’s really in need.

There’s a chance this can be slightly managed through diet, but the vet suggested this was just the beginning of a rough road. She told me to watch for weight loss, lack of appetitie and diarrhea. I’m to make a return visit for more blood tests in eight weeks.

In the meantime, lots of biscuits and doggy kisses.

I detailed Lexie’s dementia symptoms, and how they seem to have progressed in the last couple weeks. My brother and his wife, who are visiting from Florida, have mentioned how different she has been. Most times, Lex looks through them, opting to stare off in space than to engage.

The vet said there is a medication that has proven marginal success. But mostly, she said it is a quality of life issue that I will have to evaluate on my own.

My heart is so heavy weighing all of these things. 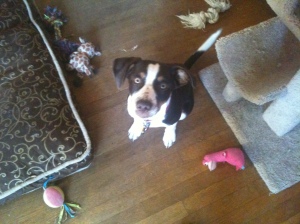 Charlie has been the best little brother. He senses something is wrong, and has toned town his rough-and-tumble puppy play. By far, Lex is his favorite part of joining our household. He follows her around, and reveres her like a mother.

This afternoon Charlie has kept busy pulling out all his toys and testing the squeakers.

NEXT: Touring Camp Bow Wow: Planning for a vacation when we have a puppy and an aging dog. 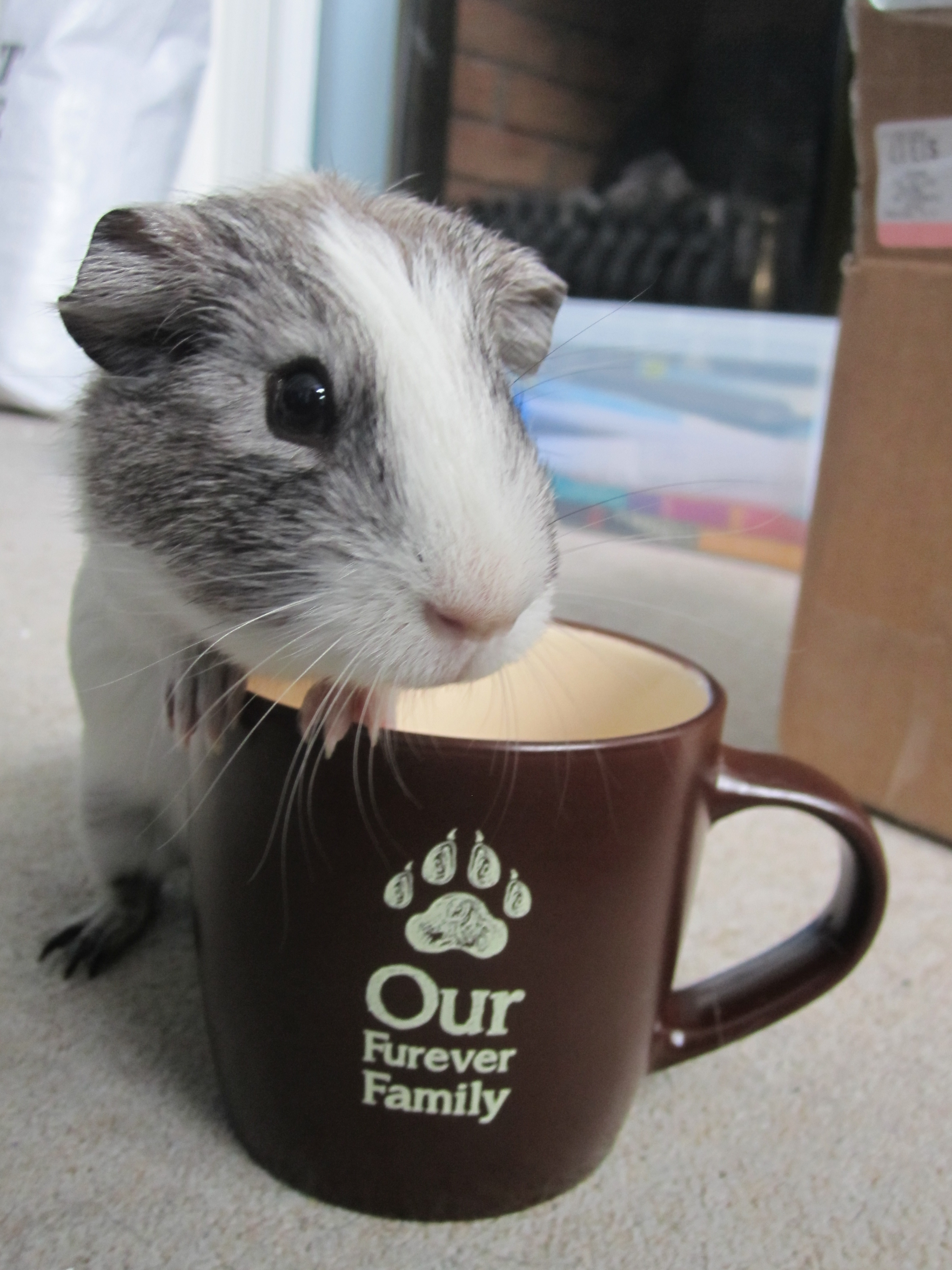