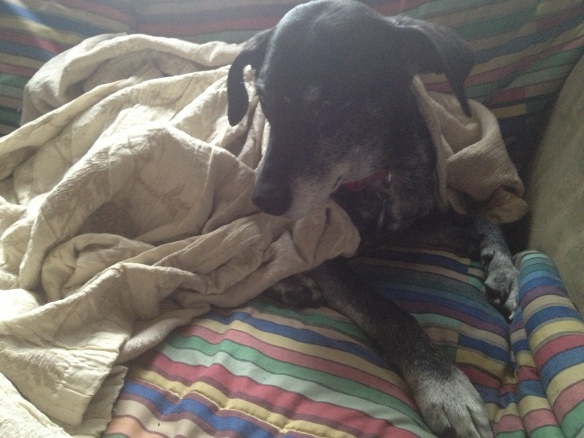 Lexie shakes off the dizziness. She’s ready for another nap.

Lex had just hopped up on the couch, and collapsed in my lap. The toxic smell of charcoal fluid washed over me. I leaned over, and could smell it all over her back. When I quickly put her on the floor and ushered her to the bathroom for a bath, she stumbled, and pulled her front left paw into her side. Her head jerked, and violently turned to the side.

Something was terribly wrong.

I frantically washed her, but discovered the fluid was only on her back, not in her mouth. I was terribly confused.

“We have to get her to emergency vet,” I told Matt, as he held her up.

We rushed her to the vet, and I silently wondered if I would return home without her.

The vet instantly ran some blood work, and came back with an unexpected development. Her kidney levels were healthy, all within range. When I explained how she was diagnosed with kidney failure last summer, and that she almost died, he said she most likely had acute failure. And this is something a dog can recover from, which apparently she has.

Then the vet offered his diagnosis. Lexie had vertigo, an intense dizziness that causes stumbling and twitchy movement. It’s unclear what caused the condition, but he said her dementia may have played a role.

Also, the charcoal fluid was a red herring. She most likely had a dizzy spell and fell on the bottle, which I had left on the ground.

Lexie paced the small vet room, as the doctor explained treatment options. She leaned into the wall, and walked all four corners, over and over again. The vet gave her a sedative so she would get some reprieve from the pacing, along with an antibiotic and a motion sickness medication.

Several hundred dollars later, we were headed home, Lex nodding off in the back seat.

Today, she is exhausted, and still experiencing the effects of the sedative. She had trouble standing on her own, and needs to be carried down the stairs so she can go outside.

It’s hard to know if she’ll come out of this, or what our next steps are. Lex is 14-and-a-half years old. She’s a gracious elder pup, who has lived a phenomenal life. She’s excelled as a big sister to Charlie, and a teacher to everyone around her.

As quickly as things fell apart, I’m desperately trying to piece everything back together.

I believe she’s still got something to give, and I still have a lot to learn.