For the first four years I’ve had Pink (Floyd), I hardly saw her. She holed up in the basement, probably decompressing from the hoarding situation I saved her from, and partly trying to figure out what to do about those two pesky pups that lived on the main floor.

Pink was a rescue. Literally. 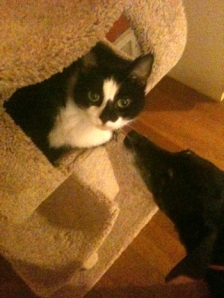 Lex steals a kiss from Pink.

A girlfriend of mine called me over one day to say her elder hippie neighbors had taken off for the west coast and left Pink behind. Apparently they had drugged the cat for the trip, and she crawled into a small dark spot and drifted off … and shortly afterward, when the hippies couldn’t find Pink, so did they.

Almost three weeks later, my friend spotted Pink in an upstairs window, and using a key the hippies left behind, she went in and grabbed her. She invited me over to show me this skinny, inquisitive tuxedo cat, and I fell in love. I needed to have her right away!

Did I mention I am terribly allergic to cats?

Well, the first six months were rough. And I was grateful she was more comfortable in a secret location somewhere in the basement. I sneezed a lot, fought hives and used my albuterol inhaler. Then something magical happened. She stopped getting under my skin.

Eventually she was curious enough to hang out on the first floor of my house longer than it took to scarf down her food. She cautiously checked out the dogs. Lex tentatively approached Pink, and customarily sniffed her butt. Pink froze and fluffed out. Lili, my late sausage-like cocker spaniel, broke up the lovefest by barreling toward them maniacally barking.

In an instant, Pink was gone.

And so the drill went. Sometimes Lex was snuggled up in a nap with Pink, and Lili would disapprovingly charge them, sending Pink packing for refuge in the basement. As chaotic as this sounds, it became their routine. Even at the end of Lili’s life, when she was very sick and frail, she would take one step toward Pink and attempt a growl. Pink would stand a second longer, and feign fear before sauntering into the kitchen.

Pink atop her new kitty condo.

In preparation of bringing another dog into the house, Matt and I decided to buy a cat tree. A cat condo, if you will. A simple wood structure covered in carpet, providing perches and hiding spots.

For some reason, Matt and I found these things quite silly. But now that Lili is gone, and Pink spends the majority of her time in the front room with us, we thought maybe we missed the point. We started staking out the area pet stores, and searching online.

In the end, we settled on a cat tree that stands about 3-1/2 feet tall, covered in light beige carpet. It has two cradling perches, and a cat cave of sorts. Matt and I worried if she would even use it at all, but we had a secret weapon … catnip. After setting it next to the fish tank, Matt took small pinches of catnip and sprinkled each perch. Then we placed Pink on top of the tree, and that was it. She rolled, and rollicked and purred. We had never seen her behave like that before. The good news is that even without the catnip, she now uses it every day.

Clearly we had waited too long to get her one of these contraptions. I foolishly thought it was enough for her to have the basement landscape, or the window in the spare bedroom. She wanted a safe space to hang out in the front room so she could be part of the family. Awwe.

And now that a puppy may be on the way, the timing couldn’t be better.

NEXT: Scouting a new pup.

Leave a Reply to Me Cancel reply